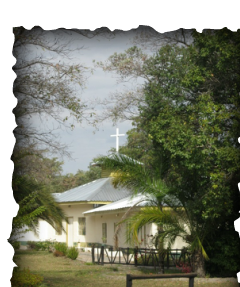 Mark and Helen both are accustomed to camp ministry and how powerful it can be in the lives of students; it was a fitting start to begin spreading the Good News and reaching out to those hurting.

The camp experience in the States is one of high-energy, lack of sleep, and powerful worship services!  In Zimbabwe, this is is still true, but the biggest difference is the fact that most of the students that attend only receive one meal a day at home, where as at the camp it is three.

In October 2009 the ministry was tested and received a major setback when word was received that 85% of the buildings were destroyed by fire. The Boys & Girls Dormitory and Chapel along with kitchen and 3 chalets were destroyed. October is the hottest and driest month of the year. Trash was being burned and the wind picked up some embers and rested it on the building. It took less than hour for the total destruction.

The camp also serves the community in that area by providing access to a bore hole and electric generator to get to the water. After the fire the community assumed the ministry would dissovled, but the Lord had other plans.

With the help of IDES and many individuals and church donations the main dormitory was rebuilt and open for business in July 2010.

Plans for finishing the Dining Hall are being made and hoped to be accomplished for 2014.

Since then, the ministry has been stronger than ever and been able to withstand the continued attacks of Satan as we shine the light in that corner of Zimbabwe!