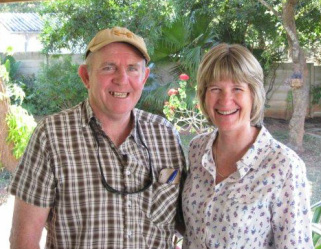 Zimbabwe Outreach Ministries is proud to be able to join with Muchinjikwa (cross) Safari and Tours and Jim Mackie a veteran in this industry.

For more information please use the form on the Contact Us page.

Profile:
Jim Mackie was born in 1957 in Nakuru, Kenya. He was brought up on a ranch till 1969 when his family moved to Zimbabawe where they lived on another farm in the north-east of the country.
He was educated in Kenya, UK and Zimbabwe, leaving school in 1975 to join the Department of National Parks and Wildlife where he worked in the department till 1989.

Throughout his career in National Parks he was extensively involved in all aspects of wildlife management including problem animal control and monitoring of the safari areas and National Parks under his authority. Jim also held a dangerous drugs license for game capture and translocation. He left National Parks as Warden of the prestigious Chewore Safari area.

Jim was first licenced as a Professional hunter and guide in 1989 at which time he left the department of National Parks to work as a Game Ranch Manager in the Save Valley Conservancy in the South East Lowveld. He was also involved in guiding, both hunting and non hunting safaris, up till the present time. Jim has always had a deep love for the African bush and its wildlife.

Jim is married to Jenny, they have been married for twenty two years and they have two children Rebecca and Sean. Both Jim and Jenny have been Christians for most of their adult lives and both are fully committed to living their lives for God's glory and serving Him according to His will and guidance. They have been good friends of Mark and Helen for the last fifteen years and have always been interested in their work in Zimbabwe. Recently they have been led into this working relationship with the Begarlys in exposing Christians to God's work in their mission and sharing in God's creation here in Zimbabwe.